on December 26, 2016
I have been wanting to visit Neil's Kitchen again since I got to try out  the Sinigang Paella with Grilled Pork Belly during one of the Zomato foodcrawls.  I'm a big fan of pork sinigang and I was surprised to learn how Chef Neil gave this Filipino favorite a new twist!  He infused sour flavors of Sinigang in the rice that is served with the grilled pork topped with crispy kangkong.

I was so glad to join the the FilinBEST FoodCrawl as it would give me another chance to try out the other Filipino comfort food that he serves with a certain flair. Chef Neil has an aptitude for doing food variations really well.  He reinvents and serves most of his signature dishes deconstructed.

For starters, we had Tokwa at Baboy.  Neil's Kitchen's take on this delicious dish made from fried pork   and fried tofu  makes use of vinegar and soy sauce added with green/red bell pepper, onions and green chillis. It added festive colors to the crispy pork, and ear meat pieces. He combine cane and white vinegar to get the most flavor out of it and it did tastes so good! 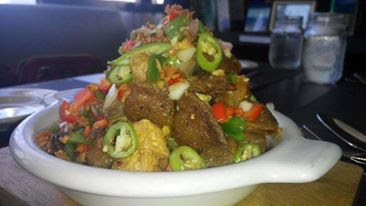 Adobo is another Pinoy dish that has a lot of versions--some are sweet, tangy or garlicky. Using simple basic ingredients, Adobo transforms chicken or pork into a mouthwatering fare. Chef Neil's Adobo Project uses both chicken and pork. Underneath the shredded chicken adobo bits lay big chunks of pork adobo.

Tomatoes, onions, fresh cilantro, mangoes, atchara and salted eggs are served on the side that allows one to mix and match flavors that would complement individual tastes. The tzatziki dressing that goes with the Adobo Project is made up of mayonnaise, yogurt sour cream. 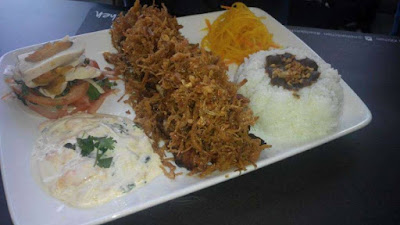 I like Neil's Kitchen innovative take on the classic Pork Dinuguan.  This savory and tangy dish is  comprised of pork stew of blood and meat. In the traditional way, the pig's blood  is stirred in  continuously  during the first minute to avoid the blood from forming. 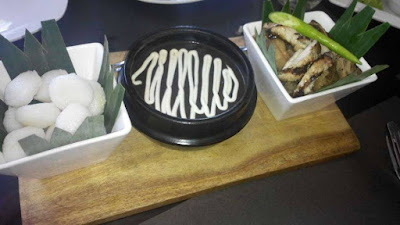 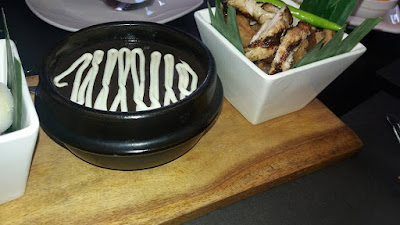 The Grilled Chicken and Crispy Pork Dinuguan Fondue recipe that Chef Neil came up with had all the same dinuguan ingredients but served separately. Customers can dip in grilled pork belly strips and white puto into the blood stew, which had  chicken bits mixed in.  The way it is presented would lure first timers to try out the  infamous blood stew. 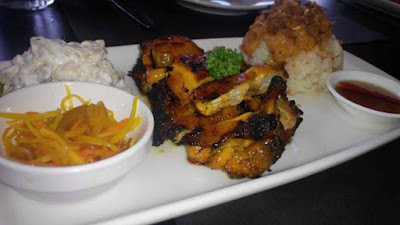 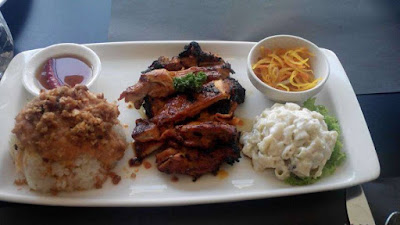 Chef Neil cooks the deboned chicken in the traditional  way and  serves his Hainanese Chicken Rice on the side along with chicken oil dip and atchara.  The  rice is infused with chicken inasal juices. 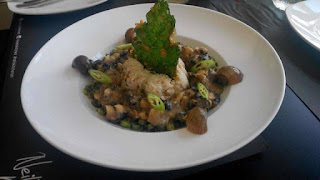 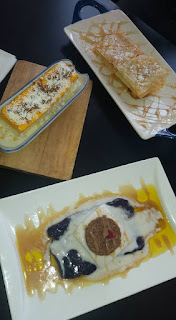 Escargot De Gata is like ginataang kuhol. These golden apple snails are cooked in coconut milk with spices like garlic, ginger, turmeric, bagoong alamang and red chili pepper. I always love eating these tasty snails the snails and miss the thrill of trying to suck the sauce and meat out of the shell. At Neil's Kitchen, you can eat this gourmet delicacy with gusto as the escargot comes in de-shelled! The meat has been carefully removed for ease of eating in public. 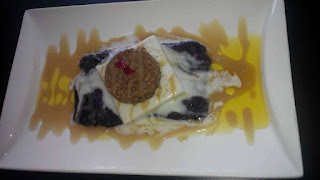 Sweet Corn Maja BB Special looks like the classic maja---soft and light with small kernels of sweet corn inside. The texture of this coconut pudding is so perfect that the fork glides smoothly as we get a slice of its yellow goodness. It is topped with a latik. 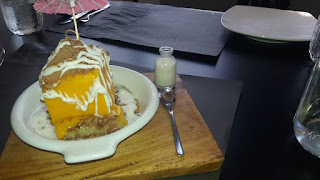 Turon de Napoleon is a feast on the palate! Napoleones is a popular puffed pastry in Bacolod City Napoleones in Bacolod City basically made of sugar, egg, flour, butter and milk. Just imagine how it would taste if the custard-lined pastry is mixed with turon. The combination results in a burst of heavenly, sweet treats. 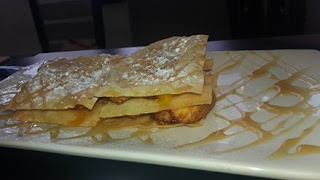 Suman (glutinous rice cakes) is a staple in every Filipino homes, so how Filipinos eat suman do vary. In Suman at Mangga, the Filipino sticky rice log is served with a ripe mango. Chef Neil tops his suman with a mango jelly made from mango puree. He tops it with chocnut and serves it with coconut milk on the side.

This  heavenly dessert is one for the books!  Try it and you'll get what I mean.

Have lunch or dinner at Neil's Kitchen this holiday season.  Your family will marvel at how pleasing and great tasting each dish is!  Chef Neil's food innovations in elevating Filipino Cuisine is really worth praises.