Planning for the Future Goes A Long Way 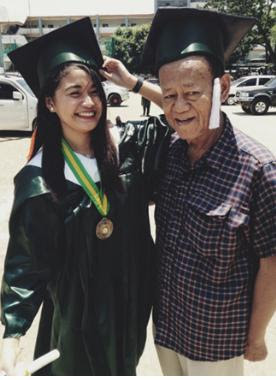 Her father, Sinfroniano, couldn’t have been more proud of her. But he should also be proud of himself, for making this possible for his precious Samantha through early planning.

Sinfroniano used to manage a local printing shop. His wife, Edna, was a school teacher. They both wanted to ensure their daughter’s college education, so Sinfroniano availed of an education policy from Philam Life. Little did he know that this act would give him more than just the education benefits he sought for his daughter.


At the age of 55, Sinfroniano had a stroke which left half of his body paralyzed. This meant that he could no longer continue working at the printing shop. Less than a year later, Edna, who had been taking care of him and their eight year old daughter Samantha, suddenly died of a heart attack.

Sinfroniano  was left with a permanent disability.  He didn’t know how he would pay for his hospital bills, and  how he would be able to raise Samantha on his own.

It was a good thing he got a Philam Life education policy for Samantha when he was younger, healthier and at the prime of his working years.

With the plan that he got, he would receive funds for every semester of Samantha’s four year college course. At the same time, the plan included cash benefits for the child’s elementary and high school years, in case the parent passes away or gets permanently disabled. These funds were used during Samantha’s elementary and high school years of education.

The plan also had a waiver of premium for total and permanent disability benefit. Because he was already permanently disabled and could no longer continue working, all remaining payments were waived. He did not have to continue paying for the balance of the education plan. These benefits allowed Samantha to finish her education at no additional cost to her father.

With foresight and early planning, Sinfroniano was able to support Samantha’s education even though he became a solo parent with physical disability.

Samantha is now working on passing the Psychometrician’s Board Exams, and plans to work and pursue her Master’s Degree.

Schools and universities increase their tuition fees almost every year, so it is best to have a plan to ensure the child’s education no matter what lies ahead.

It is also important that parents find a stable and trustworthy insurance company, with a good track record of keeping its promises.

Philam Life for one has released over P10 billion in education benefits since the year 2004 to 2015. This May, 50,000 scholars nationwide will receive their education funds in time for the first semester of school year 2016-2017. This is a testament to the company’s ability to fulfill its promise to help parents give their children a good education year after year.

Each parent should strive to have the same foresight as Sinfroniano to plan ahead for their children’s future so they can reach their full potential and achieve their dreams.