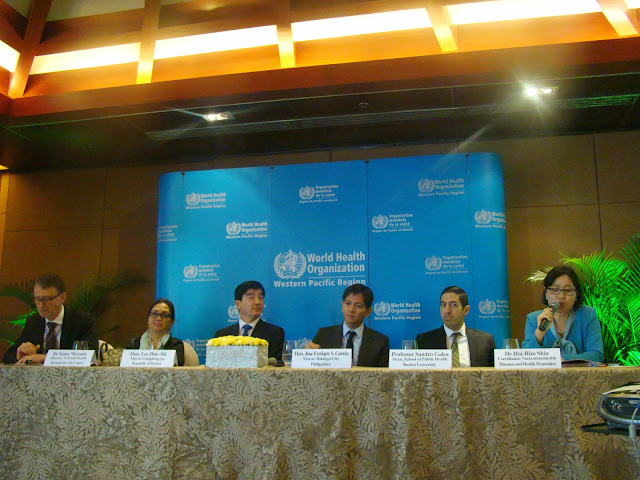 As the urban sprawl of rapid urbanization expands, it leads to the creation of several problems. Half the world's population now lives in urban areas, and this figure is expected to accelerate. With unplanned urbanization, that is a lot of vulnerable people exposed to disturbing levels of pollution, plus hazards such as floods, storms and earthquakes.

At the rate urbanization increases, it becomes necessary that this is strictly governed and conducted in an organized manner so as to prevent this growth from spiraling out of control and create further problems.

The World Health Organization recognizes the role that the city mayors play in addressing the sensitive problem of unplanned urbanization. In a presscon held at Manila Diamond Hotel last April 27, 2015, WHO invited Professor Sandro Galea (Dean, School of Public Health in Boston University), Honourable Hae-Sik Lee (Mayor of Gangdong-gu, Seoul Republic of Korea), Honourable Jose Enrique S. Garcia (Mayor of Balanga City, Bataan, Philippines), and Dr Susan P. Mercado (Director, Division of Noncommunicable Disease and Health through the Life-Course, WHO Regional Office for the Western Pacific) to raise awareness and share opportunities in addressing the issues on energy, pollution, sustainability, safety, Public Health and other challenges of the urban age.


Healthy Cities rises to these Challenges

To make cities healthy and resilient, national and local government must invest in building up a city's resources and capacity. This involves working closely with other sectors such as housing, transportation, energy, and education, to integrate health in the design of urban environment.

The World Health Organization has been working with cities across the region to recognize and promote best practices, facilitate city-to-city learning and advocate for health at the center of urban planning and development. The Alliance for Healthy Cities was established by the World Health Organization Regional Office for the Western Pacific. This international network protects and enhances the health of city dwellers. The alliance meets regularly to share knowledge and information while promoting the Healthy Cities approach to members and the public.

RichCorp lets you harness the Healing Power of Herbs