on March 06, 2015
As part of its initial offerings this year, Repertory Philippines' 4,000 Miles premieres at Philippine theaters. This critically­ acclaimed stage play written by Amy Herzog won Best New American Play by the 2012 Obie Awards, and was a finalist for the 2013 Pulitzer Prize. It was heralded as Time Magazine 's #1 Play or Musical of 2012 as well. 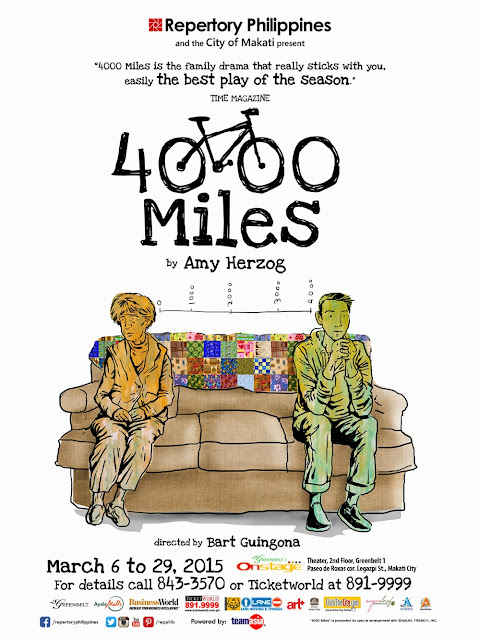 The play examines familial bond that 91-year old woman Vera Joseph and her grandson Leo Joseph Connell share and how these two find their way in today’s world.

Play starts when Leo decides to stop by his grandmother’s West Village apartment for a surprise visit. Leo has been cycling across the country but stopped communicating with his family back in Minneapolis at some point. His sudden withdrawal into himself and his unexpected arrival stirs Vera’s anxiety about his emotional state.

In the next scene, Leo's grief is compounded by Bec's announcement that they should part ways. His girlfriend (who is in college in Manhattan) comes over to berate him for not calling and to announce the break up. Later he brings home another girl from a bar, in a desire to lose himself in a little casual sex.

The bike trip has had a traumatic interruption. Leo is quietly trying to conquer his emotional frailty that resulted from a tragedy during his cross-country trip. Towards the end, Leo finally pours out some of his secrets--the reasons behind his surprise visit. Leo was dealing with his first major loss, the death of a close friend. Vera listens to his a long monologue, hidden in shadows. After Leo’s confession, Vera tells him her hearing aid wasn’t turned on, so she missed a lot of it.

Leo was lost. The moving heart of the play is how he slowly finds himself again, through his growing relationship with Vera. Watch how grandmother and grandson infuriate each other, worked their way out of their complexities and ultimately reach out to each other. 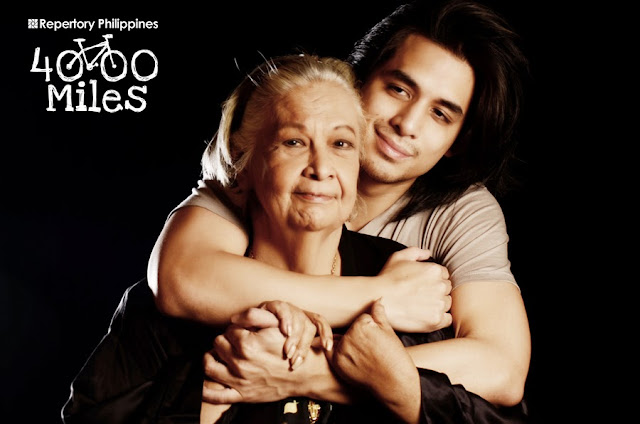 4,000 Miles will be shown starting today until March 29, 2015. Theater veteran Baby Barredo plays the role of the nonagenarian Vera, while Jeff Flores portrays Leo in Repertory Philippines' adaptation of 4,000 Miles. They will be joined by Caisa Borromeo and Cara Barredo as Bec and Amanda, respectively.

Renowned theater actor Bart Guingona, will be taking the directorial chair for this adaptation of Amy Herzog’s masterpiece. 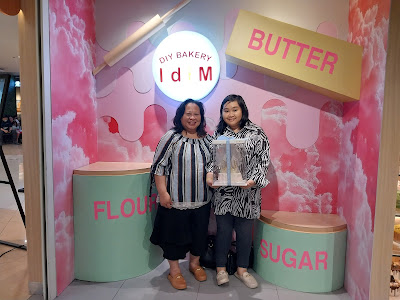 I Did It Myself DIY Bakery

If you want to try you hand at baking, then let IDIM DIY Bakery help make you that fool-proof recipe!   I Did It Myself DIY Bakery is known as Asia's First Do-It-Yoursel Baking concept in the Philippines. It teaches you to bake and decorate the treats using an app in two hours! The confections starts from ₱ 500 up depending on the how elaborate your recipe is. Choose among a wide selection of classic cakes, chocolate cakes, cheesecakes, fruitcakes, cupcakes, macaroons, cookies, and pastries. And with a tablet containing the step-by-step recipe for cake, you’re all set! The baking studio’s interior is open-concept, with Instagramable nooks and corners to document your baking creativity. It has all the essential bakery ingredients, measuring tools, baking utensils, cake decorating needs as well as packaging. There are assigned areas for mixing doughs/icings, oven baking, cooling racks, and cake decorating.  Staff members are available to assist in every st

RichCorp lets you harness the Healing Power of Herbs