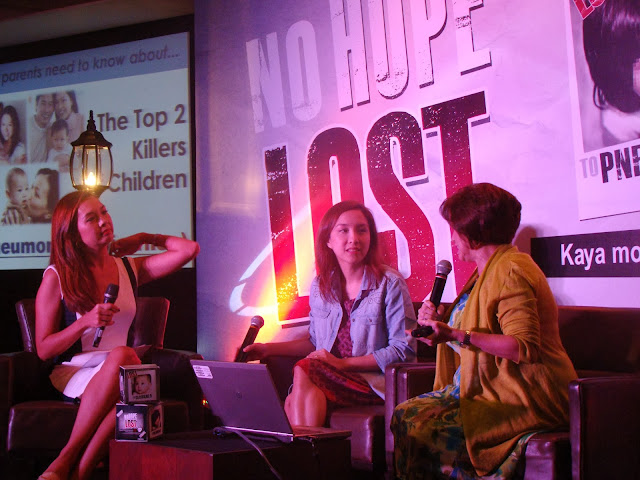 Losing a child is the most heartbreaking experience for a mother to go through. But no child has to die because of pneumonia or rotavirus diseases, especially since these are both highly preventable through vaccination. Early protection is the key to reduce disease burden.

No Hope Lost advocacy is all about raising awareness among parents that Pneumoccocal & Rotavirus Diseases can potentially lead to devastating consequences if left unchecked. While the DOH is campaigning about ridding society of these diseases, parents also play a crucial role in educating themselves about these diseases and the vaccines that can help them prevent the deadly viruses from wrecking havoc on the lives of their children and thus a campaign called “No Hope Lost” has been launched. 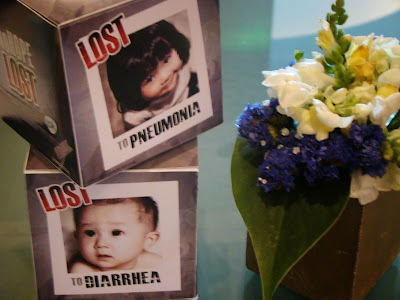 Pneumonia is the single greatest cause of death in children worldwide.

Pneumonia is an inflammatory condition of the lung which affects primarily the microscopic air sacs known as alveoli. The typical symptoms of pneumonia include a cough, chest pain, fever, and difficulty breathing.

Pneumococcal disease is an infection caused by the bacterium S. pneumoniae also known as pneumococcus which can result to life-threatening conditions such as pneumonia. It can also result to Acute Otitis Media (AOM) which is an ear infection, a common and highly prevalent disease. It also includes severe diseases such as meningitis, complicated pneumonia, and sepsis (blood poisoning), which occur when the pneumococcus "invades" the blood. The invasive forms of the pneumococcal disease are a category called Invasive Pneumococcal Disease (IPD).

Globally, diarrhea is the second leading killer of children under 5 years of age, accounting for 1.4 million child deaths annually. Rotavirus Gastroenteritis (RVGE) is the common cause of diarrhea and severe dehydration in young children. It is also the leading reason of diarrheal hospitalizations and deaths among children. It is most severe and frequent in infants aged 3-24 months.

Rotavirus infects virtually every child within the first 5 years of life, irrespective of race or socio-economic status. That is why it is called a “democratic virus.” In the Philippines, diarrhea is the second leading cause of child mortality accounting for almost 5,000 deaths yearly, translating to more than 13 Filipino children dying due to diarrhea every day.


Among the ways to get your child protected aside from breastfeeding, hand washing, preventing air pollution, and adequate nutrition, is through vaccination.

“It’s the best time to raise awareness on pneumonia and diarrhea prevention. These diseases should not cause unnecessary suffering to young children,” says Dr. Sally Gatchalian, Philippine Foundation for Vaccination Director. “Sometimes it’s just that parents don’t know enough about these diseases, and they don’t know that there are actually vaccines for them.”

THE GOVERNMENT’S ROLE IN FIGHTING THESE KILLER DISEASES

In 2012, the Philippine government has already acknowledged this burden and addressed it by introducing Rotavirus Vaccine (RV) in the Expanded Program on Immunization (EPI) where 700,000 Filipino children aged 6 weeks up to 6 months of age were given free rotavirus vaccines.

In 2013, the Department of Health (DOH) leveled up the fight against the top killer of Filipino children by including another novel vaccine called Pneumococcal Conjugate Vaccine (PCV) in the EPI.

This combined effort to protect Filipino children against pneumonia and diarrhea contributes to the achievement of Millennium Development Goal (MDG) 4 of reducing infant and child mortality by 2/3 by 2015. RV and PCV are novel vaccines introduced by the DOH in the last 5 years and the Philippines is the first country in the ASEAN region to introduce both vaccines in the EPI.

GSK’S SUPPORT IN THIS CRUSADE

As one of the world’s leading research-based pharmaceutical and healthcare companies, GSK continues to be a committed partner of both private healthcare practitioners and the government in the fight against childhood diseases, death and suffering around the world by offering health solutions for the reduction of overall diseases.

The “No Hope Lost” campaign from GlaxoSmithKline, which embodies the need for immediate action to get children vaccinated against pneumonia and diarrhea, will soon be launched through radio ads, print notices, flyers, and posters. “With the help of our dear pediatricians, and the Department of Health, we are committed to the reduction of pneumonia and diarrhea cases nationwide by supplying high quality vaccines. These diseases account for an alarming almost 50 mortalities per day in the Philippines. GSK is here to support the Filipino medical community and the government’s drive to make health services accessible to everyone,” added Philip Cruz, GSK Medical Director.

Ask your pediatrician about preventive measures against pneumococcal and rotavirus diseases.