TECNO Mobile recently concluded a couple of CSR activities in the Philippines which kicked off in 2021 with the City of Manila, the Ina ng Lupang Pangako Parish in Payatas, and the scholars of Project Malasakit as its beneficiaries.

For this year’s CSR activities, TECNO Mobile has partnered with Grab PH, plus a few of the country’s up and coming content creators, to reach out to local communities once again, and inspire people to make a difference. Through this initiative, the premium smartphone and AIoT brand, TECNO Mobile, hopes to motivate more people to participate in community outreach programs, and make them see that it isn’t about the size of the donation that counts, but rather the sincerity to help others. 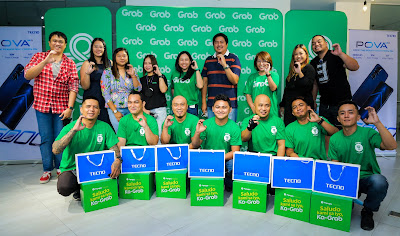 TECNO Mobile Gives Back to Grab PH Riders and Drivers

Grab PH riders and drivers have been lauded as true heroes of the pandemic over the last two years, helping make day-to-day life easier for thousands of Filipinos by making things accessible, even from home. These drivers face various challenges each day they spend on the road, but they never stop moving, and continue to provide their much-needed services to the community.

TECNO Mobile celebrates the everyday contributions of Grab PH by giving back to the company’s hardworking drivers and delivery riders. The meaningful collaboration between TECNO Mobile and Grab PH is reflective of the positive message that the POVA Neo campaign aims to impart.

A donation handover took place at the Grab PH Headquarters in Metro Manila on April 9, 2022 during Grab PH’s Papugay event, which the company mounts each quarter to show appreciation to, and recognize their outstanding drivers. As a beneficiary, Grab PH received 65 units of POVA Neo smartphones. This smartphone’s large battery capacity is perfect for the riders and drivers of Grab PH, and will be a big help as they navigate through the city, and provide excellent on-time service. The donation was received by Grab PH’s Papugay awardees, Grabfood rider Richard Aguilar, Grab driver Ricky Dalansay, Grab rider Arc Cabuello, and Grabfood rider Michael Sales.


Influencers for the Greater Good 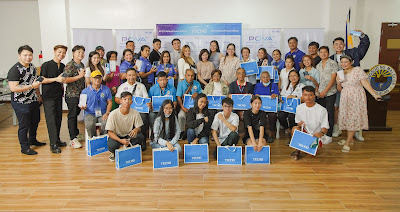 During the handover event held on April 5, 2022 at the Malolos City Hall Auditorium, 50 POVA Neo units were donated by TECNO Mobile. The said donation was to be shared among its beneficiaries coming from City Health Office and the Office of Senior Citizen Affairs, PNP, Bureau of Fire Protection, Force Multiplier, Social Services, Tricycle Operators and Drivers Association, the City Environment and Natural Resources Office, and local students. The donation was received by the Chief of Staff from the Office of Mayor Gilbert “Bebong” Gatchalian of Malolos City, Bulacan, Atty. Belle Castro. 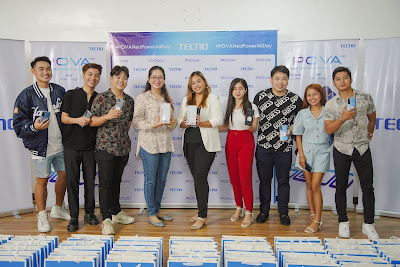 POVA Neo is loaded with amazing features that give users the power to conquer everyday tasks – An ultimate power supply, large screen, smooth performance, a smart camera, and more. With its 6,000mAh battery and Battery Lab 2.1, POVA Neo has more than enough power to last the entire day. Plus, with 18 watts fast charging, it only takes POVA Neo 35 minutes to store enough power for up to 5 hours of gaming.

Join in the Scan To Win with POVA Neo Promo, and get the chance to take home exciting prizes! Every purchase of participating TECNO Mobile smartphones from April 1 to 30, 2022 at the TECNO Mobile Concept Store in SM North Edsa, TECNO Mobile kiosks, and partner retail stores nationwide, entitles you to play the Spin to Win game. Almost 1 Million Pesos worth of fantastic prizes will be given away to more than 300 winners, including Yamaha Mio Gear 125cc Motorcycles, Samsung 50" UHD Smart TVs, the latest smartphones , cash and AIoT devices from TECNO Mobile, and cash rewards!