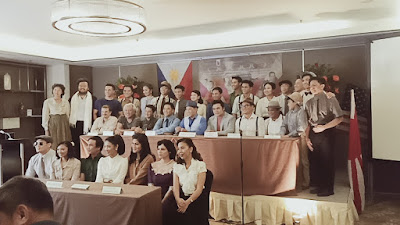 Last July 6, 2019, Atty. Vince Tañada and the rest of Philippine Stagers Foundation invited bloggers and media to the presscon of their latest musical play dubbed as "Sindak 1941".

Not much has been written about the Japanese invasion of the Philippines and so Atty. Vince together with Patrick Libao went to Japan in 2014, after he discovered the historian  Carol Petillo, who wrote a book on the MacArthur Controversy.

Vince shared that Sindak 1941 "is an entirely new musical… I have not extended my research about the simple Filipinos in the Japanese occupation until now."


The script was inspired by the 1941 conquest of the Philippines by Japanese forces and the atrocities committed against the locals. Sindak 1941 puts the Filipino resiliency to the forefront with several actors playing important roles of native resistance forces during the war. The story is being told through the eyes of four intertwined souls, brothers Felipe and Nestor, and their love interests Sofia and Emilia. These two pairs will play major parts in the battle for freedom. Lives will be lost, tragedy will unfold, as Sindak 1941  gives you a spectacular musical experience that would show this period in time, narrated by a mute wanderer Tata Edong.

You'll never look up on Douglas MacArthur's ‘I shall return’ heroic deed the same way again after learning about the “MacArthur Controversy".

Research has shown that President Manuel Quezon actually paid Douglas MacArthur US$500,000 to come back to the Philippines. The MacArthur Controversy makes "quite a good subject for the musical,” Vince added.