I Like Wearing Rainbows: A Children’s Story on Acceptance and Love 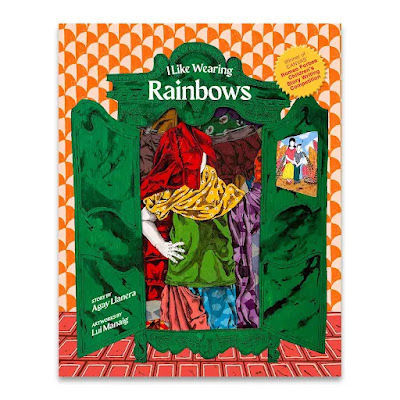 The virtual shelf of online store www.lookingforjuan.com just got brighter with the addition of I Like Wearing Rainbows.

A tale of unconditional love, it takes readers through a colorful arc of fear, wonder, gloom, delight, grief, and acceptance. Told through the eyes of a child, the words tug at heartstrings and touch profoundly. The hardbound book has 48 pages brought to life by the vibrant art of painter and strong advocate of LGBT rights, Lui Manaig.

A product of a one-of-a-kind competition, I Like Wearing Rainbows began with one artwork that invited Filipino writers to submit a story around it. Among 70 submissions, the one by freelance TV and children’s books writer, Agay Llanera received the judges’ nod. Her winning piece was then turned over to Lui so he could continue creating more paintings to support it. 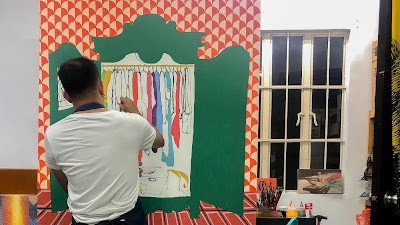 “Most of my works lean towards LGBT issues but when I came up with the first painting for the competition, I made sure it was open to other interpretations,” shares Lui. But for the rest of the paintings, he was more straightforward with the message, keeping in mind that his audience will be children and their parents.

While Agay immediately fell in love with Lui’s art, she initially had no intention of joining the competition. She just shared the announcement on her social media account. But for some reason, she found herself thinking of someone dear to her who liked wearing bright dresses when he was a little a boy and was moved to write the story.

“I wanted something that wasn't preachy but conveyed the message that children are allowed to experiment and break stereotypes. After all, dressing up, no matter what gender the kids have, is a form of play. It's us, adults, who like keeping the little ones in boxes based on our prejudices and other people's opinions. I wish readers can gain a different perspective after reading this story. I hope that the next time they encounter a child who does or likes something outside the gender stereotype, they will not be quick to judge,” she says.

Lui’s experience coming out to his parents wasn’t difficult but he has memories of his peers making fun him because he was too feminine and different. “I would like this to be a step towards starting the conversation at an early stage because kids need their parents to accept them, the parents should be the first. And I hope parents will also teach their kids kindness and inclusion, to be careful with their words and not judge those who are not like them,” he articulates.

I Like Wearing Rainbows may be purchased for ₱1,200 at www.lookingforjuan.com. Every sale is matched by a donation of books to two Filipino kids in disadvantaged communities through the store’s Buy-1-Donate-2 program.

Looking for Juan was created in 2019 with social responsibility at its core. It aims to promote public appreciation for Philippine art and culture, and champion children’s literacy. Every item purchased from the online store gives back. Some of the story book titles that Looking for Juan carries include Silim: Prinsesa ng Dilim by Mark Joseph Bacho, Why Words Matter: Why We Read and Why We Write by Butch Dalisay, The Rocking Horse by Becky Bravo, Mga Munting Patak ng Ulan by Jessica Olmedo, Si Ponyang at ang Lihim ng Kuweba by Melvin B. Atole, Ang Anghel ng Santa Ana by Josephine de Dios, and Ang Aklatang Pusa by Eugene Evasco.

Lui Manaig (b. 1992) is a contemporary visual artist. He graduated with a degree in Fine Arts major in Advertising from the Technological University of the Philippines – Manila. Manaig shares a bit of himself in his works. His visual investigations are autobiographical and mirror social concerns—from gender identity, notions of diversity and equality, to acts of self-representation. His works are unique in the way they show movement, placement, color blocking, and distinct patterns. In 2012 and 2015, he became a semi-finalist for Metrobank Art & Design Excellence (MADE). He also participated in ArtFair Tokyo and ArtFair Philippines as an exhibiting artist for Nunu Fine Arts, Taiwan.