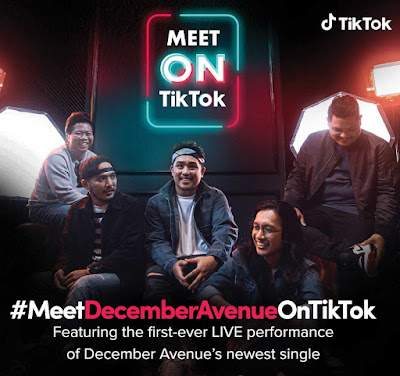 Exclusive live performance and fan meet at the #MeetDecemberAvenueOnTikTok event!

Get to see Indie rock band December Avenue at @MeetOnTikTok this August 2021!  The said band is set to perform on August 29, 2021 at 7:00 PM, and the show will stream live via their official TikTok account, @decemberavenueofficial.

As TikTok Philippines' flagship entertainment platform, @MeetOnTikTok provides fans with an opportunity to enjoy special live performances from their favorite artists, and connect with them through an exclusive fan meet. @MeetOnTikTok also serves as a virtual stage where artists can launch fresh content and perform new music, which gets broadcasted via TikTok Live.

Known for their softcore rock compositions, December Avenue has a solid following in the Philippines, and is recognized as one of the most-streamed OPM bands of all time.

December Avenue will be performing their hit songs live during the @MeetOnTikTok event on August 29, and viewers will get to enjoy the first-ever performance of the band's newest single "Isang Himala".

Select lucky fans will be given the chance to interact with December Avenue during the livestream event! To join, simply complete these easy steps:

Fans also have the chance to win exclusive merch, personally signed by each member of the band, by simply tweeting about the livestream event using the hashtag #MeetDecemberAvenueOnTikTok. Lucky winners will be announced after the livestream.

Download TikTok on your iOS and Android devices today.