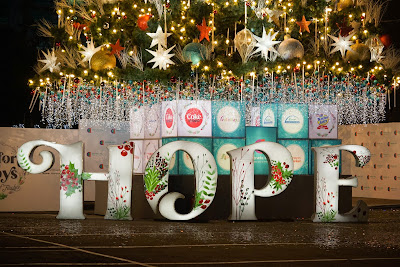 Araneta City has formally ushered in the Yuletide Season with its Giant Christmas Tree lighting activity.
The online event last November 14, 2020 marked an all-digital program that was filled with prizes and musical performances from some popular celebrities today! Dubbed as “Comfort and Joys at the City of Firsts,” the event streamed live through Facebook and YouTube---the first in 39 years that Araneta went all-digital, foregoing the usual merriment that goes with its annual tradition,in light of health protocols currently in place. 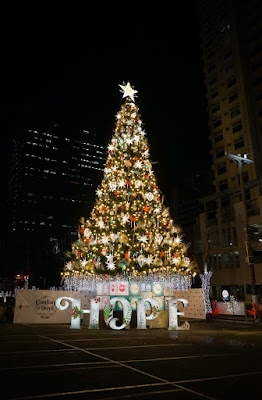 While it has been an extremely difficult year under quarantine, Araneta City wanted to spread good tidings to all and experience the magic of Christmas even at home. Audiences on Facebook and YouTube still felt the Christmas cheer with back-to-back performances from some of the biggest musical acts in the country.

The festivities commenced with a pre-show hosted by Ana Ramsey. Coke Studio brought in the December Avenue band, which sang some of their hits and even rocked out to a modern rendition of the Christmas jingle “Joy to the World.” Twenty lucky winners also took home some exciting prizes during the pre-show; ten of which won a pizza package from Pizza Hut delivered straight to their homes, and another ten snagged a Noche Buena package for a delicious spread this Christmas.

After the pre-show, Robi Domingo took over. Jeremy Glinoga, The Voice - Teens finalist sang his own Yuletide hit “Ngayong Pasko” while Janine Berdin, the champion of Tawag ng Tanghalan, sang the beloved Holiday song “Jingle Bell Rock.” A highlight of the program was the special performance from Vice Ganda, who belted out the classic “All I Want for Christmas is You” but done with a punk rock twist.

Aside from the wonderful musical performances, many members of the audience were thrilled with the prospect of winning the night’s top prize. One lucky winner’s Holiday will surely be more festive after winning a Grand Entertainment Showcase!

I’d like to wish you all a Merry Christmas and a Happy New Year. I hope [this event] gives you hope and happiness. Pwede ba we see each other here at Araneta City? Maybe your next visit,” Araneta-Roxas remarked.

Afterwards, the celebrities all came together to start the Christmas Tree lighting countdown. Adorned with thousands of lights and various ornaments, the Giant Christmas Tree has a very important message to deliver—--hope.

This was especially timely as many of our countrymen are still reeling from the effect of several typhoons that hit the country in the past few weeks. The Giant Christmas Tree Lighting also gave importance to Araneta City’s relief efforts for people who were affected by the recent tragedies. Through Operation R.E.A.C.H. (Relief Efforts of Araneta City to Help), the City of Firsts is focusing on the real meaning of Christmas---- giving to those in need.
Visit https://aranetacity.com to know more about Operation R.E.A.C.H. and the other Araneta City programs and promotions.