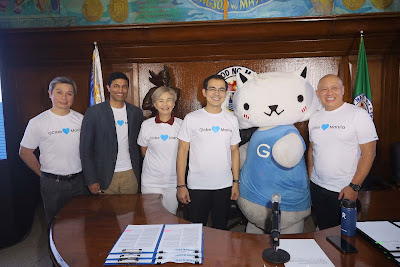 Globe has collaborated with the City of Manila to spearhead the digital transformation of the country’s capital by providing fast and reliable internet connectivity in key areas with GoWifi and delivering financial technology services to the city’s scholars with GCash.

The MOA also covers the use of GCash as the official financial services platform to send allowances and other monetary benefits to about 15,000 scholars under the Office of the Manila City Mayor. Students will receive a corresponding GCash Mastercard to withdraw their cash allowance, and will also serve as their official identification card as a bonafide scholarship beneficiary of the city.

The said collaboration with the City of Manila is a first step in contributing to the city’s digital transformation initiatives. “Providing free WiFi services via GoWiFi and bringing financial inclusivity via GCash are just the initial undertakings from our end to contribute to the digitalization efforts of the city. Our goal is to provide the entire digital ecosystem of Globe for Manilenos to enjoy their digital lifestyle,” Ernest Cu  revealed.
He also signified  intention to improve the Globe network in the city to enable its digitalization. “We need to build additional 100 wireless sites to improve the signal in Manila”.


In addition, Globes has several ongoing corporate social responsibility initiatives as part of its sustainability program directly benefited Mañilenos, such as the Globe Plastic Xchange program held in Brgy. 455 last September 14 where single use plastics were collected in exchange for rewards points, turnover of information and communication technologies equipment and a computer lab to Manila Science High School, roll-out of Globe's Digital Thumbprint Program (DTP) to Manila Science High School students in 2016 to teach them responsible use of the internet and which will be adopted in the curriculum of the Department of Education for all public schools including those in Manila City, and Globe's participation in the Manila Bay coastal clean-up with the Department of Environment and Natural Resources this September 21.

GoWiFi continues its expansion plans nationwide, particularly in high-traffic areas like malls, hospitals, and schools to make high-quality internet connection accessible and affordable to more Filipinos. As of the first half of the year, GoWiFi is accessible in 2,500 sites nationwide, up by 500 sites from the previous year.

To date, GCash has made financial transactions easier for its 20 million registered users. And with over 70,000 partner merchants in the country, it truly has helped revolutionize the way Filipinos transact.