Live like a Queen with this Exclusive Giveaway by ZEN Rooms!

ZEN Rooms, the official hotel partner of Miss Asia Pacific International (MAPI), is running an Exclusive Giveaway to celebrate its partnership with MAPI. 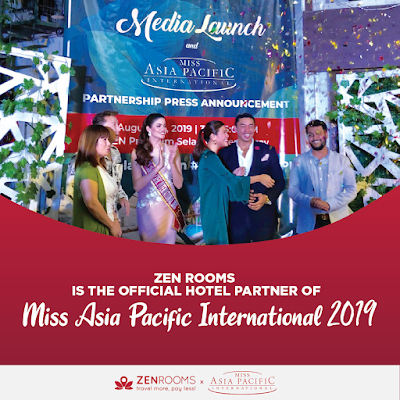 Get ready to witness the Glam life you always wanted! Jump in because it's about to get real!

10 lucky winners in total will also get 1 invite each to the ZEN Rooms Exclusive Pool Party with
the Miss Asia Pacific International MAPI contestants on October 3. Everyday 1 winner each will be announced on ZEN Rooms PH Facebook until October 1.

Always wanted to stay with the beauty queens? Well, now you can! ZEN Rooms, the official hotel partner of  Miss Asia Pacific International is running an Ultimate Giveaway for all you fun people and what that mean  is that one lucky winner will get to stay with the top contestants at ZEN Premium Selah Garden for 3D 2N
and also see them take the crown with his/her free two tickets to the Grand Coronation Night.

A total of 10 winners will also get an invite each to the Exclusive Pool Party with the contestants.

To join in the ZENxMAPI2019 giveaway:
1. Like ZEN Rooms PH and Miss Asia Pacific International on Facebook!
2. Share the giveaway post with the hashtag #ZENxMAPI2019
3. Tag 5 of your best friends who would love this!


"The partnership between ZEN Rooms and Miss Asia Pacific International iss  We are the #1 hotel chain in the Philippines and they are the industry leaders when it comesto beauty pageants, so it was natural for
both of us to join hands. Coming to this giveaway, we believe, it will be an amazing experience for the contest winners to witness the thrilling life of the top contestantsi an up close and personal manner. From the pool
party to stay at ZEN Premium Selah Garden and finally, the grand coronation night, everything would be special for them and I am sure they would love it just like they love ZEN." said by, Amit Shukla, ZEN Rooms Philippines’ Regional Marketing Director.