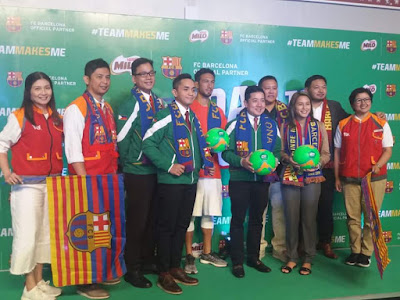 Sportsmanship has to be inculcated from an early stage. The values that you instill in your children as part of their sports experiences have a huge impact. The values your children learn from sports shape their lives. By instilling values that you believe in children, MILO aims to lead them to a fulfilling and enjoyable sports experience, and a successful, happy, and value-driven life.

Global sports icons, MILO and FC Barcelona, kick off YEAR 2 of the global partnership during the press launch held today in the MILO Stadium of Kidzania Manila. Coming from a successful run last year, MILO and FCB will hold this year’s local invitational camp in football hotbed, Cebu City on September 8-9 at the Cebu City Sports Center.

Over 160 girls and boys ages 10 to 12 from around the country will participate in the world-class football camp for a chance to join the life-changing champion experience in Spain, the home of FC Barcelona. 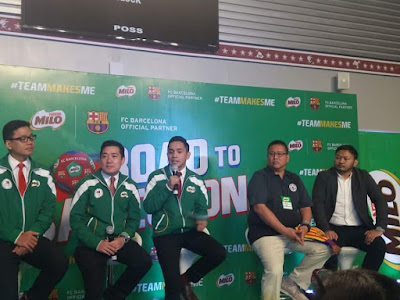 Asisting MILO in the facilitation of the invitational camp are the Cebu Football Association (CFA), a regional body under the Philippine Football Federation (PFF) and two coaches (Anton del Rosario and Amanda Fernandez) from the FCB Youth Academy, FC Barcelona’s flagship youth development program. The two-day training camp which features theoretical and practical sessions on how to play the Barca way is free of charge—a privilege for the qualified young players. It will give them the kind of training that only FCB can offer to aid in their continued development, progress Philippine football, and further inspire Filipinos to be champions on and off the field.

Cebu Football Association Vice President Rico Navarro exclaims, “We warmly welcome this momentous collaboration with two iconic sports brands, MILO and FC Barcelona. Our region has some of the most passionate and talented young players in the country, and we hope that this Road to Barcelona camp can foster the right values and grow their appreciation for the sport and everything they learn from it.”

MILO and FC Barcelona, embark on a four-year partnership aimed at enhancing the quality of life of children through a more healthy and active lifestyle. The purpose-driven partnership brings together MILO and FC Barcelona’s shared belief of youth development through sports and the values learned from them. This year, MILO Philippines launches the Road to Barcelona-a selection camp that will scout for the next football champions and give them a once in-a-lifetimeexperience training in Camp Nou, the home stadium of FC Barcelona.

“Every kid dreams of becoming a champ. That’s why the MILO-FCB Road to Barcelona Philippines Camp is back to provide kids the once-in-a-lifetime opportunity to train with youth coaches from FC Barcelona. We’ve taken this year’s invitational camp to the Visayas to share the program with even more children in the region, because we believe that these experiences can encourage them to pursue their passion for the sport and nourish their ambitions,” said Willy de Ocampo, Vice President, Nestle Philippines, Inc.

Milo’s aim is to nourish the ambitions of kids through their participation in sports, and encourage well rounded personalities. FC Barcelona prides itself on five principal values, namely: ‘Humility’, ‘Effort’, ‘Ambition’, ‘Respect’, and ‘Teamwork’. Building on these shared values, Milo and FC Barcelona formed a four-year global partnership to promote healthier lifestyles and the importance of physical activity to young people. Together, they are developing a series of sports programmes to encourage more young people to take part in sports. Committed to developing school sports in the Philippines for two years now, Milo is leveraging this global agreement to help develop football in the country as well as develop and inspire young football stars through its ‘Road to Barcelona’ initiative.

.The expert panel composed of PFF representatives and FCB coaches will be in charge in shortlisting the most deserving athletes who will fly to Spain. Players will be chosen according to the MILO and FC Barcelona values they exemplify. And one slot in the delegation will be all-expense paid by MILO Philippines.
The Philippine team delegates will be among their peers from other MILO markets which incude Australia, Colombia, Dominican Republic, Indonesia, Jamaica, New Zealand, Panama, Singapore, Tahiti, Thailand, and Vietnam. Their nine-day training camp and ultimate experience in FCB’s hallowed grounds in Camp Nou, Barcelona will be filled with special activities that will hone their skills, encourage them to make new friends, explore scenic heritage locations. Most importantly, they will learn how to play with HEART—the Barca way.

MILO Philippines Consumer Marketing Manager Robbie de Vera shares his excitement for year two of the four-year partnership, “MILO is very excited and honored to continue its advocacy to get more kids into sports and help advance Philippine football with FC Barcelona. Our goal for this year is to further enrich the ‘Road to Barcelona’ experience by reaching more Filipino kids and reinforcing the values that encourage more kids to dream big and become champions in life.”