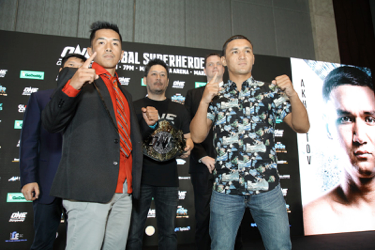 The largest global sports media property in Asian history, ONE Championship™ (ONE), recently held the ONE: GLOBAL SUPERHEROES Official Kick-Off Press Conference last January 22, 2018 at the Manila Grand Ballroom of the City of Dreams.

Main event competitors Geje Eustaquio the Philippines and Kairat Akhmetov of Kazakhstan faced-off for media in attendance. They will be competing for the ONE Interim Flyweight World Championship in the headline bout of ONE: GLOBAL SUPERHEROES which takes place Friday night, 26 January at the Mall of Asia Arena in Manila. 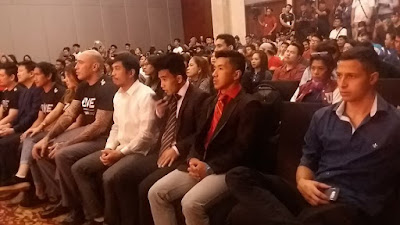 Chatri Sityodtong, Chairman and CEO of ONE Championship, stated: “It is always great to be back in Manila because the Philippines is one of the countries that truly and deeply appreciates martial arts. This is the reason why ONE Championship continually upkeeps holding blockbuster shows for our passionate Filipino fans. ONE Championship is set to hold four events in the country for 2018, and our first Manila card for this year will put fans on the edge of their seats, making them crave for more authentic martial arts action.”

Headquartered in New York with offices in Canada, Australia, Germany, and the United Kingdom, Global Citizen was founded in 2012 with the goal of building the largest platform where people can learn about issues, take action on what matters most, and join a global movement working to end extreme poverty by 2030. Since then, millions of Global Citizens around the world have taken over ten million actions, which includes millions of emails, tweets, petition signatures, and phone calls targeting world leaders to end extreme poverty by 2030. To date, the actions by Global Citizen’s global community, along with its high-level advocacy efforts and various partners, have resulted in 130 commitments and policy announcements from leaders, including financial aid valued at over US $35-billion, that is set to affect the lives of over 1.3 billion people.

Wei Soo, Co-Founder and Managing Director of Global Citizen, stated: “We are thrilled to be joining forces with ONE Championship to bring Global Citizen to Asia. ONE Championship reaches millions of young people around the region and together we will engage them on issues that impact the entire world. Since we launched Global Citizen in 2012, over 13 million actions have been taken, and we are excited to drive more actions and increase our impact for the world’s most marginalized people through this partnership.”

Geje Eustaquio, ONE World Title Challenger, stated: “I am expecting another difficult bout. Kairat Akhmetov is tough and has a huge heart inside the cage. That is why I am preparing very well for this rematch. A victory over Kairat would land me a rematch against Adriano Moraes. I believe I have what it takes to become the undisputed ONE Flyweight World Champion in the future.”

Kairat Akhmetov, ONE World Title Challenger, stated: “I am coming into this interim title match-up with the mentality that it will be me versus the world, and I am ready for it. In 2017, I had ups and downs. I do not want to look back. In 2018, I am looking forward to reaching my dream to battle Adriano Moraes for the third time. But of course, I have to beat Geje Eustaquio first to fulfill my dream.”

Top flyweight contender and former world title challenger Geje “Gravity” Eustaquio of Baguio City, Philippines, is one of the most skilled martial artists in Asia, and a highly-decorated wushu practitioner. His solid striking and grappling skill set has led to huge victories over the course of a seven-year professional career. Training in the high altitudes of the Philippines’ Summer capital, Eustaquio hones his craft alongside world-class teammates at the fabled Team Lakay. Known for his incredible ability to keep calm in the face of adversity, Eustaquio is set to headline ONE: GLOBAL SUPERHEROES opposite Kairat Akhmetov for the ONE Interim Flyweight World Championship.

Former ONE Flyweight World Champion Kairat Akhmetov is a veteran martial artist from Almaty, Kazakhstan. The 30-year-old boasts a solid 24-1 professional record amassed during a stellar martial arts career which has seen him dominate his opponents with tenacious wrestling and powerful striking. In his most recent appearance inside the ONE Championship cage, Akhmetov defeated Geje Eustaquio via closely-contested three-round split decision. Now he faces Eustaquio in a rematch, this time for the ONE Interim Flyweight World Championship.

For Tickets to ONE: GLOBAL SUPERHEROES, get it from www.onefc.com