on November 28, 2017
Last November 27, 2917, the Department of Tourism (DOT) Region 4A cited the provinces of Quezon and Laguna as the “Destination of the Year” for attracting the most number of tourists in the Southern Tagalog region. Both provinces recorded 6.6 million same-day tourists and 1.22 million overnight visitors, respectively, in 2016.


Excellence Awards for hotels, resorts and other tourism establishments were given at the 4th Calabarzon Tourism Summit, which was held at The Bellevue Manila.

The recipients of Pillars of Tourism Award included Taal Vista Hotel in Tagaytay, Villa Escudero Plantations and Resort in Quezon, Enchanted Kingdom in Laguna and the Costales Nature Farms in Batangas. Calabarzon Tourism Summit 2017 carried the theme, “Working Towards Sustainable Tourism and Building Partnerships Through Appreciation and Recognition.”   Calabarzon is composed of Cavite, Laguna, Batangas, Rizal and Quezon.

DOT-Region 4A also cited the media, other hotels, resorts, provincial, city and municipal tourism officers plus tourism supporters for their outstanding contributions during the summit which carried the theme, “Working Towards Sustainable Tourism and Building Partnerships Through Appreciation and Recognition.” 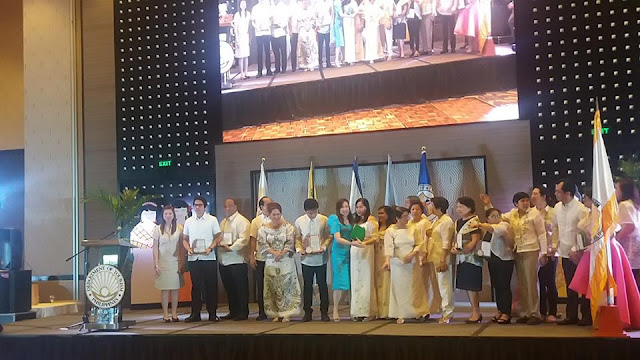 
DOT’s Bring Home A Friend (BHAF) campaign in the Calabarzon region was also launched in the same event. DOT is targetting an increase in foreign visitors to 7.5 million from this year’s official target of 6.5 million and so the BHAF program encourages Filipinos to become tourism ambassadors here and abroad.

Slated to last for six months from its recent international launch last October, the BHAF  encourages all Filipinos and Filipino expatriates living abroad to invite foreigners to the country by giving them the chance to win raffle prizes, which include a Megaworld Eastwood Le Grand condominium unit, a brand-new Toyota Vios and a P200,000 gift certificate from Duty Free Philippines Corp.

The foreign invitees, who make the trip on invite of their Filipino friends, also stand a chance to win round trip international and domestic tickets plus a staycation package at selected resorts.