on November 19, 2017
AirAsia in partnership with World Vision celebrates the season of giving through a joint Christmas initiative called “See the World,” an awareness building and fundraising effort for the benefit of Filipino children.

“See the World” aims to raise at least one million pesos to provide sponsorship program for many children as direct recipients across the country. For every AirAsia seats booked or sold in the Philippines from 1 to 31 December 2017, five pesos will be automatically donated to World Vision’s child sponsorship program. 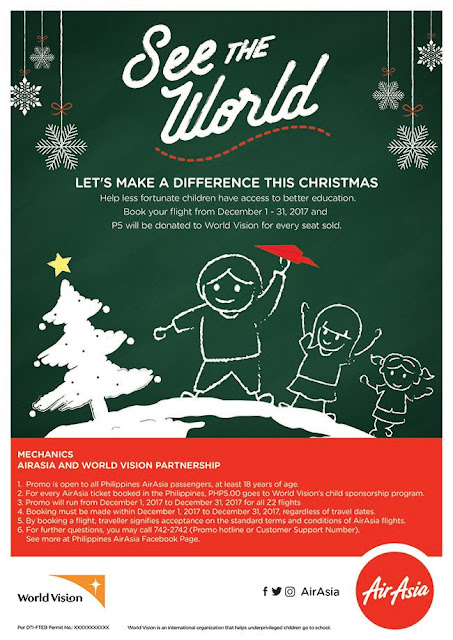 AirAsia Regional Chief Operating Officer Pete Chareonwongsak said, “The collaboration between AirAsia and World Vision represents another step forward in our commitment to the philosophy that no corporation can live apart from the community it serves. As a truly Filipino airline, we will always extend a helping hand to the communities we serve.”

“AirAsia as a global brand is honored to partner with an international relief, development and advocacy organization as we both share the same commitment and passion in helping communities especially children see the wonders of the world through sponsorship programs in education.”

World Vision Philippines National Director Rommel Fuerte, meanwhile, said, “As we celebrate the 60th anniversary of World Vision here in the Philippines, we are very thankful to have this milestone partnership with AirAsia Philippines. With this significant initiative, we can ensure that every peso that will be donated to World Vision will help a lot of underprivileged Filipino children attain their dreams.” “Christmas in the Philippines is very much celebrated and being involved in this exciting project is truly a gift that enables us to reach out and help as many children as we can.”

Aside from fundraising efforts, “See the World” will feature inspiring stories of children from impoverished communities around the country whose lives have changed and caused other children and communities to aspire for better living conditions. “See the World” was officially launched today at Hotel H2O with World Vision Philippines ambassadors led by Asia’s Romantic Balladeer Christian Bautista, singer and rapper Quest and radio DJ and host Gelli Victor.

World Vision ambassador Christian Bautista said, “Working with World Vision in the Philippines is really a joy for me. Yes, I am able to touch the lives of these children when we reach out to them. But they don’t know how their smiles are able to change me as a person. And with the wonderful ‘See the World’ collaboration of AirAsia and World Vision, each one can have that chance to touch each other's hearts and celebrate Christmas in a different way.”

For his part, Quest, also an ambassador for World Vision said, “I don’t feel any burden being a child sponsor. In fact, it makes me feel wonderful being able to help. And through this ‘See the World’ campaign of AirAsia and World Vision in the Philippines, it will be easier for anyone to help.”

AirAsia Philippines will run a web series online and available in AirAsiaPhilippines facebook starting November 20. Keep updated and find out more about “See the World” through #AirAsiaWorldVision and #SeeTheWorld hashtags.

The AirAsia “See the World” Christmas project is also brought to you by AirAsia BIG Loyalty Programme.