Witness The Victory 2.2.and Kick your Way to Barcelona with BEKO 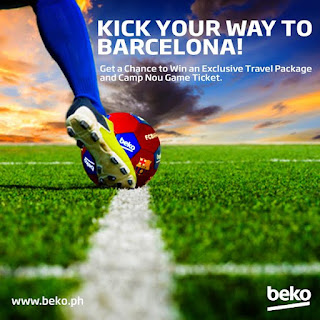 BEKO gets inspired by this generation’s changing needs and strives to give them the best and most beneficial solutions through innovative products. Beko delivers exceptional value for money, providing smart, innovative and energy efficient home appliances. By listening to millions of consumers in more than 100 countries, BEKO has developed various smart solutions to cater to the needs of different people, different cultures, and different ways of life


With its wide range of kitchen and laundry appliances, BEKO never stops thinking about innovations and novel ways to overcome challenges. BEKO also respects the environment by offering resource-efficient and environmentally friendly products with superior technologies and stylish design.


surrender, that build a good team and that know how to enjoy every moment that happens at home. “Witness the Victory” with BEKO & FC Barcelona


In 2015, BEKO launched its brand new advertising campaign to support its global Premium Partnership with FC Barcelona. The campaign, which celebrates team spirit., features FC Barcelona’s best known football players including Lionel Messi, Neymar Jr., Gerard Piqué, Luis Suárez and Andrés Iniesta working together, both on the pitch and at home, showing how they inspire and support each other as a team. Barcelona’s winning spirit is captured perfectly, showing fans how team spirit really can implement change for the better.


Part of this partnership is the global consumer raffle promotion entitled “Witness the Victory 2.0!” Experience Camp Nou and Enjoy Barcelona for Free. Now on its second year, the raffle promo runs from November 1, 2016 until January 15, 2017 and is open to all buyers of BEKO products.


Two (2) winners will be drawn and each will enjoy a trip for two (2) to Barcelona, Spain to watch an FC Barcelona match live in April 2017. The tax free prizes include Two (2) Round Trip Tickets to Barcelona, hotel accommodations with breakfast for 2, Barcelona City Tour, and Two (2) La Liga Match Box Tickets.


To strengthen also the recently launched Beko Philippines Facebook fan page (@Bekoph), Beko Philippines is holding the activation promo “Kick Your Way to Barcelona: The Beko Grand Kick-off Challenge.” The promo is open to everyone who has a valid passport (except for professional football players). For one to join, he or she must do the following:


Step 3: Upload a creative photo of one’s self or with friends with a caption that says- #HelloBekoPH and press the Submit Entry button.


There will be a Qualifying Round that will be held on January 14, 2017 with registration from December 3 to January 7, 2017. Participants of the Qualifying Round shall be given three (3) attempts within one (1) minute each to try and kick the ball inside a customized mock up washing machine goal from a designated distance of twenty (20) feet. There shall be a knock-out phase and the Top Ten (10) participants who successfully made the most number of goals shall move-on to the Grand Kick-Off Challenge.


During the Final Round on February 9, 2017, the top 10 participants shall be given three (3) attempts within one (1) minute each to try and kick the ball inside a customized mock up washing machine goal from a designated distance of twenty (20) feet. The participant with the most goals shall be declared the grand winner. In case of a tie, the shoot around with 3 attempts and one minute limit shall be repeated until one emerges as the grand winner.


The 10 Contestants (Qualifiers) who will reach the Final Round will be given a specially designed Beko FC Barcelona Gym Bag. Sparta Philippines, the country’s only indoor football pitch located in Mandaluyong City, is the venue of the Kick-off challenge event.


The winner will receive a plane ticket for one (1) to Barcelona, Spain, a ticket to an FC Barcelona match to be held at Camp Nou, hotel accommodations, inland transfer, and city tour