Are you an aspiring film professional? Looking for best way to prepare yourself for a career in the film industry?

People in the film industry like to work with people they know and trust. So breaking into these circles will prove to be difficult for some. It will take to grow your referral network until work become more steady.

If you are facing the difficult task of choosing where to begin your career path, why not join a workshop this summer? Brillante Mendoza’s Center Stage Productions is staging a seven-day workshop divided into Directing, Acting, Scriptwriting, and Cinematography, from March 28- April 3, 2016 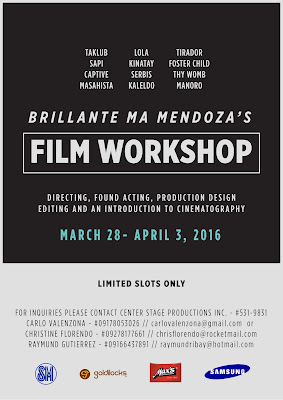 Join in the number of students, professionals, filmmakers to undergo rigorous training under the film expert. Working under Mendoza or with the people who have been working in the field for a long time, is the fastest way to increase your practical knowledge.

Learn, play, be inspired, and harness your own creativity in one of the most anticipated summer activity this year.