RisingStars Philippines may just be your Ticket to Stardom

If you love singing, you may be the Philippines' next singing sensation!

This biggest talent competition is going around in search for the best-of-the-best singing talents all over the Philippines to represent their home city or province.

The competition has been launched at the beginning of October in Dumaguete and this year the RisingStars team has already visited Palawan, General Santos, Davao, Cebu, Cagayan de Oro and the cities of Central Luzon as Dagupan, Lingayan-Pangasinan and Pampanga.

And as the RisingStars Philippines does its rounds nationwide, Recording Booths will be available in  most frequented Malls during the audition period. There will be RisingStars singing stations in selected schools and barangays as well for contestants to come to and participate in.

Moreover, the battlefields doesn't end at the mall tours. RisingStars Philippines takes the show talents, creativity and entertainment to the studio as the contest progresses to its final stages, following the action and score on the TV screen and online. 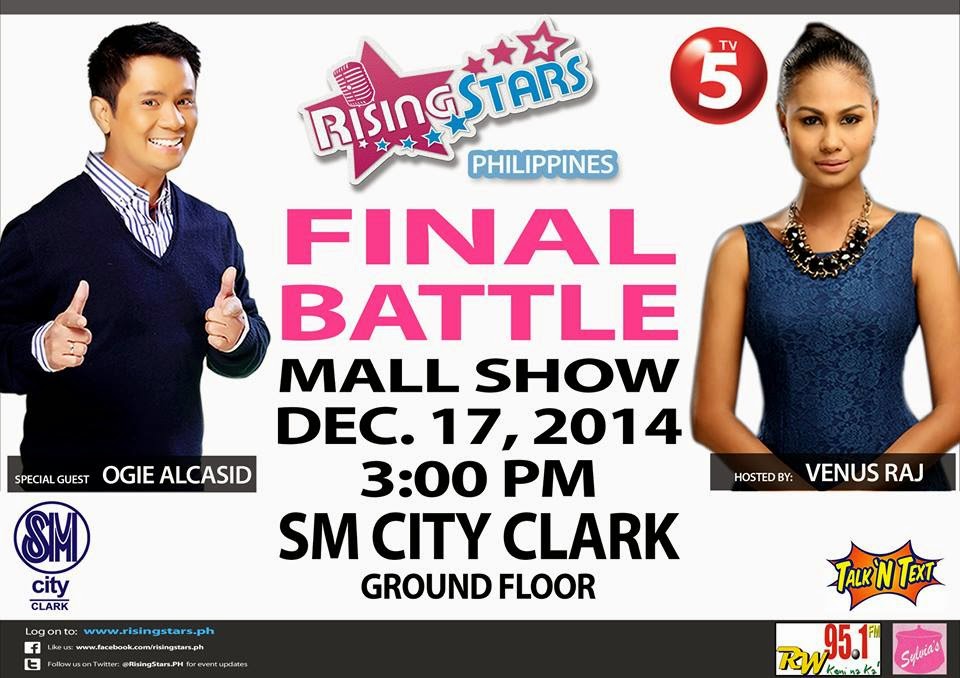 Join in as 14 singers from Pampanga and Dagupan, Lingayan-Pangasinan sing their hearts out live on-stage on December 17th at 3pm at SM City - Clark, Pampanga. The mall show live final competition will be hosted by Ms Venus Raj and Ogie Alcasid.

The top 2 winners from this stage of the competition shall get an-all expense paid trip to Manila to be seen on primetime TV during the live sing-offs and telecast of the RisingStars Singing Contest to be aired starting February 2015 on the Kapatid Network TV5.

Grab the chance to be a star! Pick a song, sing, record your performance and rise to fame on primetime TV show! You’re just one song away from your dreams. Be a RISING STAR!