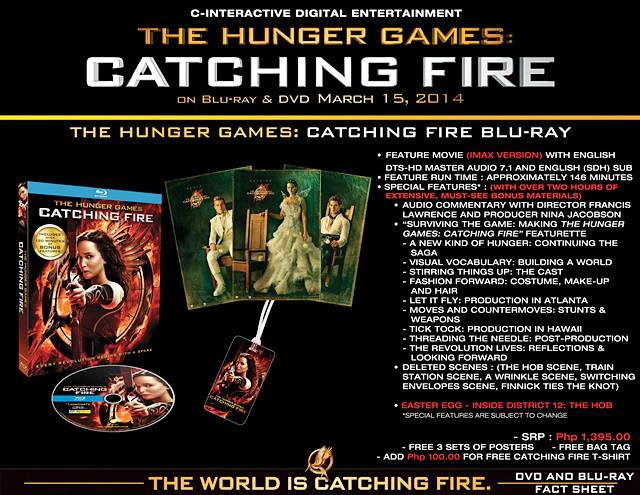 Academy Award® winning Best Actress Jennifer Lawrence (2012’s Silver Linings Playbook) headlines the all-star cast in this action-adventure which became the 1 movie of 2013 and grossed over $850 million worldwide to date. 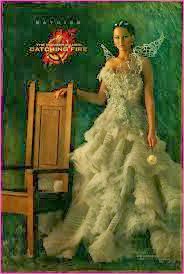 The second installment of the worldwide phenomenon is packed with over two hours of extensive, must-see bonus materials that include a behind-the-scenes look at the making of the film, “Surviving the Game: Making Catching Fire,” deleted scenes and an audio commentary with director Francis Lawrence and producer Nina Jacobson.

Based on the best-selling second novel of Suzanne Collins’ award-winning trilogy, with a screenplay by Simon Beaufoy and Michael DeBruyn and directed by Francis Lawrence (I Am Legend), The Hunger Games: Catching Fire begins as, against all odds, Katniss and her fellow tribute Peeta Mellark have returned home after surviving The Hunger Games. Winning means they must turn around, leaving their loved ones behind and embarking on a “Victory Tour” through the 12 districts.

Along the way, Katniss senses a rebellion simmering – one that she and Peeta may have sparked. At the end of the Victory Tour, President Snow decides to enact the Quarter Quell, the right to make a change to the Hunger Games, which he is allowed to do every 25 years. Former champions will compete against each other in a special champions' edition for the Hunger Games' 75th anniversary. Only one will survive, and Plutarch Heavensbee, the Hunger Games' new commissioner will arrange that it won't be Katniss or Peeta.

By pre-ordering any version of the home video of Hunger Games Catching Fire, customers will INSTANTLY receive not one but THREE limited edition 16” x 24” posters of Katniss, Peeta and Finnick and a Catching Fire Bag Tag when you pre-order the Limited Edition 2 Disc DVD or the Blu-ray version! In addition, for just an extra Php100.00, will also get an exclusive Catching Fire T-Shirt which is only available through this offer.

Pre-order The Hunger Games: Catching Fire now at all branches of Astroplus and Astrovision Nationwide and selected Odyssey and O’Music & Video outlets.

Other new releases on DVD and Blu-ray includes the Unrated Director’s Cut of Riddick, Escape Plan and The Mortal Instruments: City of Bones.

For more information, log on to www.c-interactive.com.ph and on www.Facebook.com/cinteractiveph.

For additional information about this release, you may contact: