on December 10, 2013
As part of her charity mission, the “American Idol” sensation Jessica Sanchez appeared in a press conference at the Sofitel Hotel to promote her latest single, “Lead Me Home”. 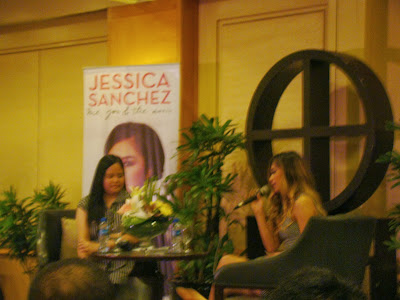 She partners with Starkey Hearing Foundation to help assist indigent Filipinos with hearing loss to acquire hearing aids. Jessica related that being able to give the gift of hearing to deaf people from General Santos City, Lipa City and Batangas City had been such a wonderful experience for her. She made a that she would use her fame to be part of a charity to help the less fortunate when she was just starting out as a singer and she would like to take on such opportunities as her advocacy.

“I would be happy to do anything that I can to give back to my people,” she said. To add, the survivors of super typhoon Yolanda will benefits from proceeds of her recent online concert and sales of “Lead Me Home”.

The soaring ballad “Lead Me Home” is one of the 39 tracks of the all-star compilation album, “Songs for the Philippines”. Part of the album sales will go to the Philippine Red Cross as part of its efforts to helped rehabilitate the survivors of the devastating typhoon.

Jessica was overjoyed learning that her rendition of the Philippine National Anthem at the recent Pacquiao-Rios fight in Macau brought a lot of joy to her fellow Filipinos, including the typhoon survivors in Tacloban City who saw the fight live for free.

“It was crazy actually because Manny asked me to sing it on Twitter from out of nowhere. And I felt so honored. I probably had about two to three days to learn the song. It was hard but I didn’t want to disappoint. But I’m happy that everybody is okay with the way I sang it, and I’m glad I made you guys proud,” she exclaimed.

Although the “American Idol” sensation is slated to fly to the US this Tuesday, December 10, she promised that she will be back before the end of the month to welcome 2014 with a New Year’s show at Eastwood City in Libis, Quezon City.

Excited about her upcoming gig, Jessica said she will perform the “upbeat songs” in her debut album, “Me, You and the Music”, released last March by MCA Music. These include “Tonight”, her hit duet with Ne-Yo, “No One Compares” which features Latino-American singer-songwriter Prince Royce, and “Don’t Come Around”, which contains an interpolation of the 1985 rock single of Tom Petty and the Heartbreakers, “Don’t Come Around Here No More”.