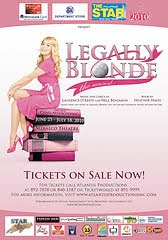 ELLE WOODS is coming to Manila in “Legally Blonde, The Musical” through Atlantis Productions.

The musical hits the Philippine stage on June 25 at the Meralco Theatre with TV and recording artist Nikki Gil headlining the show. Based on the blockbuster film that starred Reese Witherspoon, “Legally Blonde, The Musical” is about sorority star Elle Woods, a Barbie incarnate. The Musical begins when Elle’s boyfriend dumps her for another girl who is more “serious.” She hits the books and sets out to follow the love of her life at Harvard Law School to win back her man. , She achieved what no other Delta Nu member has done and have proven that being true to oneself never goes out of style.