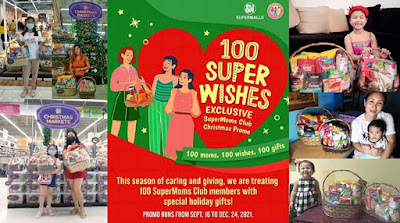 To honor and treat the hardworking supermoms in our lives, SM Supermalls launched its 100 Super wishes promo, in partnership with SM Markets. The said activity aims at gifting exclusive SuperMoms Club members with #ChristmaSayaAtSM holiday baskets worth ₱1,500!

For supermoms who want to participatr, there are only two things you need to do. Simply submit your comments about your Christmas wish with the hashtags #100SuperWishes and #ChristmaSayaAtSM on the official SuperMoms Club promo post on Facebook and tag five SuperMom-friends to spread SM’s 100 Days of Caring and Giving.

Since its launch last September 16, the promo has had over 36 thousand entries with the 1st and 2nd batch of winners announced last October 25 and November 25, respectively.

So far, over 13,400 entries are in for the Batch 3 which will run until December 24. And supermom winners from this batch will be announced on Christmas Day, just in time for a perfect and delightful celebration with your loved ones!

To date, the internationally-acclaimed SuperMoms Club has over 205,000 members, making it the country's biggest Parenting Group on Facebook Philippines!

Christmas wouldn’t be as magical without our mom’s special superpowers at home, so let’s give them this super treat as our way of thanking them for all they do.