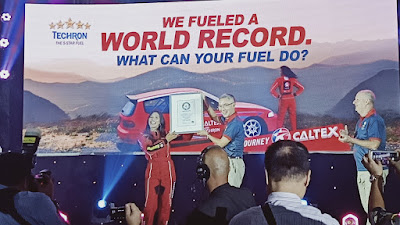 Caltex customers will be glad to know that the same Caltex with Techron they fill up with in their everyday journey is the same fuel that recently powered a 28-year old Honda Civic car to set a world-record of fastest 1,000 meter ascent up Doi Chang Mountain, Thailand’s highest peak, in under 7 minutes. 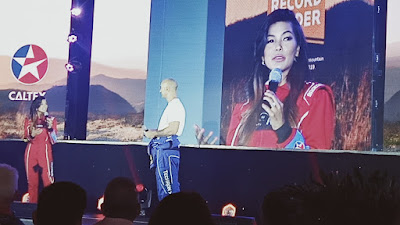 
This was revealed today during the media launch of Caltex’s latest campaign, Record Breaking Fuel, in partnership with Guinness World Records. The event also features, Record Rides, a two-part show produced by National Geographic that shows the journey of the attempt to set a World Record by Caltex.


Record Rides, puts two well-known TV personalities, adrenaline junkie and radio DJ, KC Montero and professional race car driver Natasha Chang on a mission to create the craziest, record breaking driving experiences in Asia. Their challenge is to conquer the summit of Thailand’s tallest mountain, Doi Chang Mountain Road using an everyday car powered by Caltex with Techron® fuels. Along with bragging rights, at stake is the Guinness World Record. It is a record that breaks new grounds as there is no such existing record and no effort has been done before using an everyday car.

“As a leading visual storyteller, National Geographic’s programming pillars of exploration, education and science resonate well with the Caltex brand. Hence, we are proud to partner with the channel to create Record Rides for our viewers and motorists in Asia. This show will demonstrate how Caltex with Techron® fuels can power an engine towards achieving an extraordinary journey,” says Brian Fisher, Caltex Brand Manager.


The two episodes of Record Rides on National Geographic, with Caltex as the sole presenting partner, is part of Caltex’s Fuel Power Challenge. A record timing of 6 minutes 52.692 seconds, the fastest ascent of Doi Chang Mountain Road by a car was set by Natasha Chang.

“Caltex with Techron® is specially formulated to clean and protect engines. The GUINNESS WORLD RECORDS® title achievement helps demonstrate how a clean engine powered by Techron® can function at its most optimum, which includes delivering maximum power to your wheels,” said Greg Engeler, Product Engineering Manager for Caltex.

With the world record powered by Caltex with Techron®, the campaign encourages drivers to fuel up with the same fuel that set a world record.