Get ready to break the “Glass” at SM Cinema! 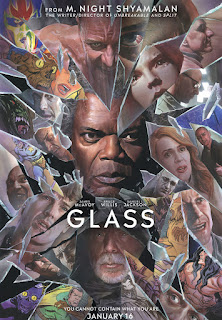 Master storyteller M. Night Shyamalan is back to shatter you with disturbing revelations and shocking plot twists in his latest masterpiece “Glass”.  Feel the thrill and experience the intensity of this action and suspense-filled film at SM Cinema, the largest film exhibitor in the country.


One of the most anticipated sequels of 2019, the superhero thriller Glass connects the stories of the 2000 film, Unbreakable, together with its main characters, David Dunn (Bruce Willis) and Elijah Price aka Mr. Glass (Samuel L. Jackson), and the 2016 film, Split, together with the mentally-ill, Kevin Wendell Crumb (James McAvoy) and his 24 personalities.

Picking up the ending of Split, David Dunn decided to catch Kevin Wendell Crumb under his superhuman persona, The Beast in a series of escalating encounters, while the shadowy presence of Price emerges as an orchestrator who holds secrets critical to both men.

Price pits Dunn and Crumb against each other,. Will the hero win against the villain this time?