Regine and Nate Alcasid stars in the newest Jollibee TVC 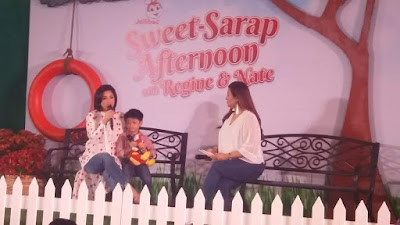 Jollibee introduced Asia's Songbird Regine Velasquez-Alcasid and her son, Nate Alcasid, as new additions to its celebrity endorsers last April 12, 2018. The said mom and son tandem, have been handpicked to promote the brand's Jolly Spaghetti. 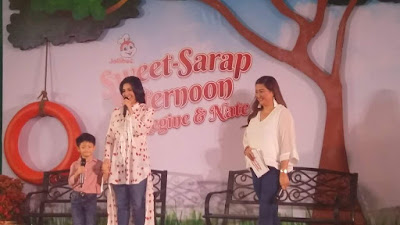 In the commercial, Regine revisits a familiar scene—a full concert auditorium with thousands of adoring fans—with a sweet-sarap surprise backstage for Nate. The ad goes on to show us special everyday moments between mother and son, with Regine narrating how being a mom has shed new light on day-to-day situations.

“We are so grateful that Jollibee picked myself and Nate for their Jolli Spaghetti commercial, let alone their brand ambassadors,” said Regine. Regine believes that the Jollibee TVC is the most special for both her and Nate. “The storyboard is so touching and very personal. It shows my different roles as Regine, but it also shows that my greatest one is being a mom, which is the most difficult yet most fulfilling role I have to play,” Regine shared.

Jollibee said Regine and Nate was the best choice for Jolly spaghetti. Both “represent the loving relationship between a mother and son/daughter”.

Regine and Nate’s Jolly Spaghetti commercial is the most heartwarming among Jollibee’s TVCs that is hitting public interest. It has found a place in Filipino’s heart, and has now become a trending spectacle on social network.  The new Jollibee spaghetti TVC sincerely captures that wholesomely family detailing relationship between Regine and Nate. “I really found the TVC touching, as in naiyak talaga ako while reading the script, and they really though about the concept very well that is captures my relationship with Nate,” said Regine. 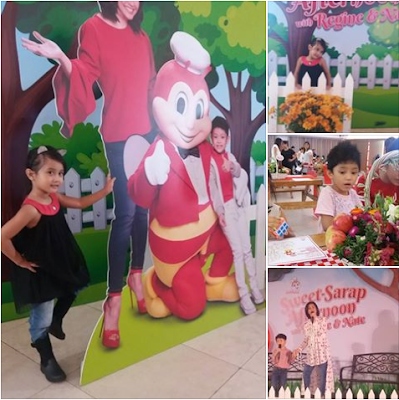 Both Regine and Nate love to talk to one another about anything and everything under the sun—one of their favorite bonding activities.“Nate and I are so close. We talk a lot, particularly before bedtime he just talks a lot, which is great. He would join me in my singing stints, of which he has developed interest in music,” said Regine

“He always has a lot of kwento for me at night,” Regine said. “He would always say, “Mommy, last kwento,” but this last story would go on for 20 minutes! But honestly, that’s the highlight of my day. He really loves talking.”

Regine shared that she had Jollibee food delivered to her sister's home, where Nate spent his second birthday. And while the mascot appearances are strictly done inhouse, Jollibee had made arrangements to have them over and make Nate's second birthday celebrations extra special.

Nate loves the pinoy sweet taste of Jollibee spaghetti and loves having it for meryenda almost everyday.

“Jollibee make good products that really captures the heart of every Filipino. Spaghetti they make is just perfect that it relates to every Fillipino’s taste for home style pinoy cooking.”

Like Regine and Nate, make your family bonding moments more special with the sweet-sarap na walang katulad Jolly Spaghetti. The Jolly Spaghetti Solo retails for only P50.00* and the Jolly Spaghetti Family Pan (good for four to five persons) for P199.00*. Both are available in all Jollibee stores nationwide for dine-in, take-out, delivery, and drive-thru.