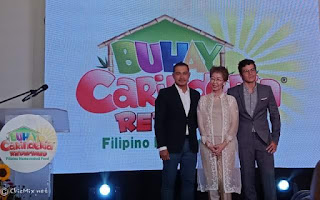 Food is a necessity and a vital life activity. I usually head out to carinderias when I am craving for homegrown food or regional deldelicacies. Having meals in a carinderia is the best way to experience eating genuine Filipino dishes to me.

Carinderia is a local eatery that sells and serves home cooked Filipino viands. The affordable home-cooked specialties they serve have become an integral part of our culinary and social identity. Most Carinderia owners are people who love to cook dishes for their family. Carinderias are the closest to what one gets at Filipino homes, where great recipes are handed down through generations.


Carinderia owners make it a point to showcase their cooking expertise through creation of locally made dishes at a very low price, in order for them to earn a little for their living. This is the reason why Carinderias are guaranteed to sell genuine home cooked meals. for everyone. They try to expand their cooking services to their clients and their family members as well. 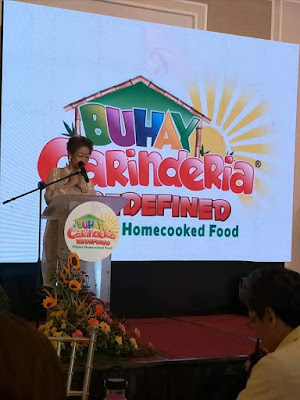 Now, these home-cooked specialties from local eateries will be this year’s highlight for the biggest Philippine culinary event called Buhay Carinderia.

Marylindbert International, Inc. acknowledges the vital role of carinderias play in Filipino’s culture and customs, that it initiated a unique advocacy called Carinderia Fiesta in 2011 (later renamed Buhay Carinderia) to help improve the carinderia’s image, help the entrepreneurs behind them present their unique style of cooking to a wider audience.

The 6th staging of the event, “Buhay Carinderia… Redefined” is supported for the first time by the Tourism Promotions Board (TPB) of the Department of Tourism, as its Sole Presentor.  The latest leg  is scheduled to scour the whole country in search for the best of the best in our culinary scene.

When restaurant and bar investor,  Erwan Heussaff opened a pop-up carinderia for one day last year to promote his newest online game, the organizers of this year’s ”Buhay Carinderia…Redefined” immediately knew whom to tap as their Content Creator. 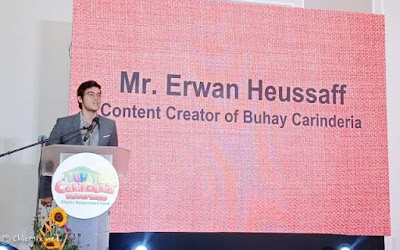 His blog ”thefatkidinside” has been viewed by millions since 2011, his Facebook page has about 1 million likes, 1.14 million followers on Twitter, half a million subscribers on youtube and 1,9 million more on lnstagram. 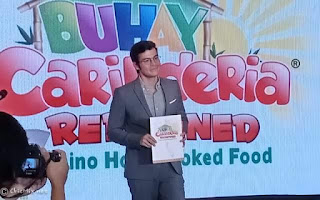 But more than his online popularity, Erwan has long been an advocate of healthy and affordable eating, his recent crusade where he came up with a P150/day meal plan, to prove that if you eat local, you don’t need to break the bank, only endeared him to more Filipinos. He also recently produced a show, called Origins, which is all about 8 different provincial areas in the Philippines.

He clearly represents the ’Buhay Carinderia…Redefined’ advocacy: to focus and understand the history of local dishes; to popularize the use of natural and native ingredients; and to accentuate Filpino home-cooked flavours,” explains Linda Legaspi, organizer of the annually-held event.

Erwan Heusaff said, “I may not be a Filipino food expert yet, there are so many dishes that i still need to discover, but l’m curious to keep learning and I am a staunch advocate of our culinary culture.”

Food Tour Around the Country

First to be visited will be the areas of Northern Luzon-15 provinces that comprise Regions 1 and 2 as well as the Cordillera Administrative Region. “From these cities and towns we will identify the best dishes, the individuals that prepared them, and the carinderias where they work for,” relates Legaspi.

Eventually, all  these local culinary experts will gather at Vigan Convention Center from June 28 to 29 to share their talent to everyone and interact with chosen students of the area-through mentoring partnership in order to  pass on their skills and experiences to enthusiasts. The respective region’s best practices will be shared as well as discussions on availability of local ingredients.

“During this two-day exposition to showcase all the surrounding provinces’ culinary gems, we will also be searching for young individuals who will become our Philippine Tourism Millennial Ambassadors. They should be able to enlighten everyone of their town’s (or city’s) deep and multi-cultural food history,” says Legaspi.

This same framework will be followed as “Buhay Carinderia… Redefined” explores Central Luzon (particularly Pampanga, regarded as one of the culinary capitals of the Philippines) area, the Bicol region, the Visayas region (Regions 6, 7 and 8 and finally, the Mindanao region (Regions 9, 10, 11, 12, and 13).  Similar to  Vigan, there will also be a culminating 2-day event in San Fernando, Pampanga; in Naga; in Cebu; and finally in Davao City. 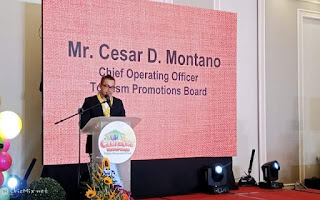 “To cap off this nine-month-long culinary journey all over the Philippines, ’Buhay Carinderia… Redefined’ will stage its biggest culinary exposition in November where all the regional bests under one roof will be showcased. There will be exchange of knowledge and with the experts and most successful personalities we will invite, we will be honing if not refine previously undiscovered talents from the audience,” believes Legaspi.

Legaspi also explains that as its proponent, ”Buhay Carinderia… Redefined” is convinced that food plays a key part of all cultures, a major element of global intangible heritage and an increasingly important attraction for tourists. “The linkages between food and tourism also provide a platform for national but also regional economic development. These days anyone could notice the focus of many tourists has changed from the classic ‘must see’ physical sights such as natural wonders or monuments towards a ’must-experience’ imperative to consume intangible expressions of culture.”

Legaspi explains that there’s a real pride in each of the town or city visited. ”Not only of the community’s rich agricultural heritage, but of the many recipes linked to it. And based on what we have seen so far, with the help of the TPB and the city’s or town’s ongoing appetite for celebrating its culinary roots, the future is bound to be just as delicious.”