Catch The Game’s Afoot at OnStage 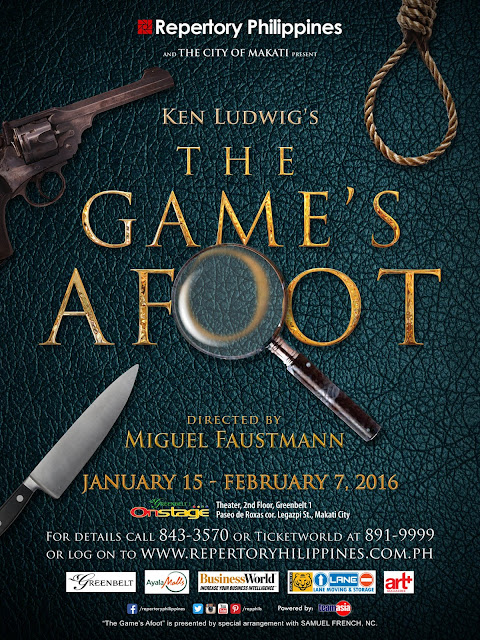 This January, put your detective hat on as Repertory Philippines brings the devilishly funny murder mystery The Game’s Afoot to the Philippine stage.

Written by Ken Ludwig, this wicked comedy play follows Broadway star William Gillette, who is known for his brilliant portrayal of the famous detective Sherlock Holmes.

The Game’s Afoot is set in 1936, in the castle home of famed actor William Gillette. Gillette has been shot in the shoulder while on stage at New York’s Palace Theatre. Recovering, he invites his castmates Felix and his wife Madge plus Simon and his new wife Aggie to his home to spend the Christmas holiday together. That’s what Gillette want all the “suspects” to think as he plays Sherlock Holmes for real.

There has been a series of mysterious deaths lately, the most recent is that of a door man at the theater. And Gillette aims to expose the killer before he strikes again! Hilarity ensues as each one accuses one other of murder when one turns out dead on Christmas eve. And the solving and committing of several murders and attempted murders begins!

When you think you've figured out who the bad guy is, you will start to question yourself as the plot takes an unexpected twist!

The Game’s Afoot will be staged until February 7, 2016 at Onstage Theater in Greenbelt 1, Makati City. Ticket prices ranges from P 418 to P 836.