50th Anniversary of the British Invasion 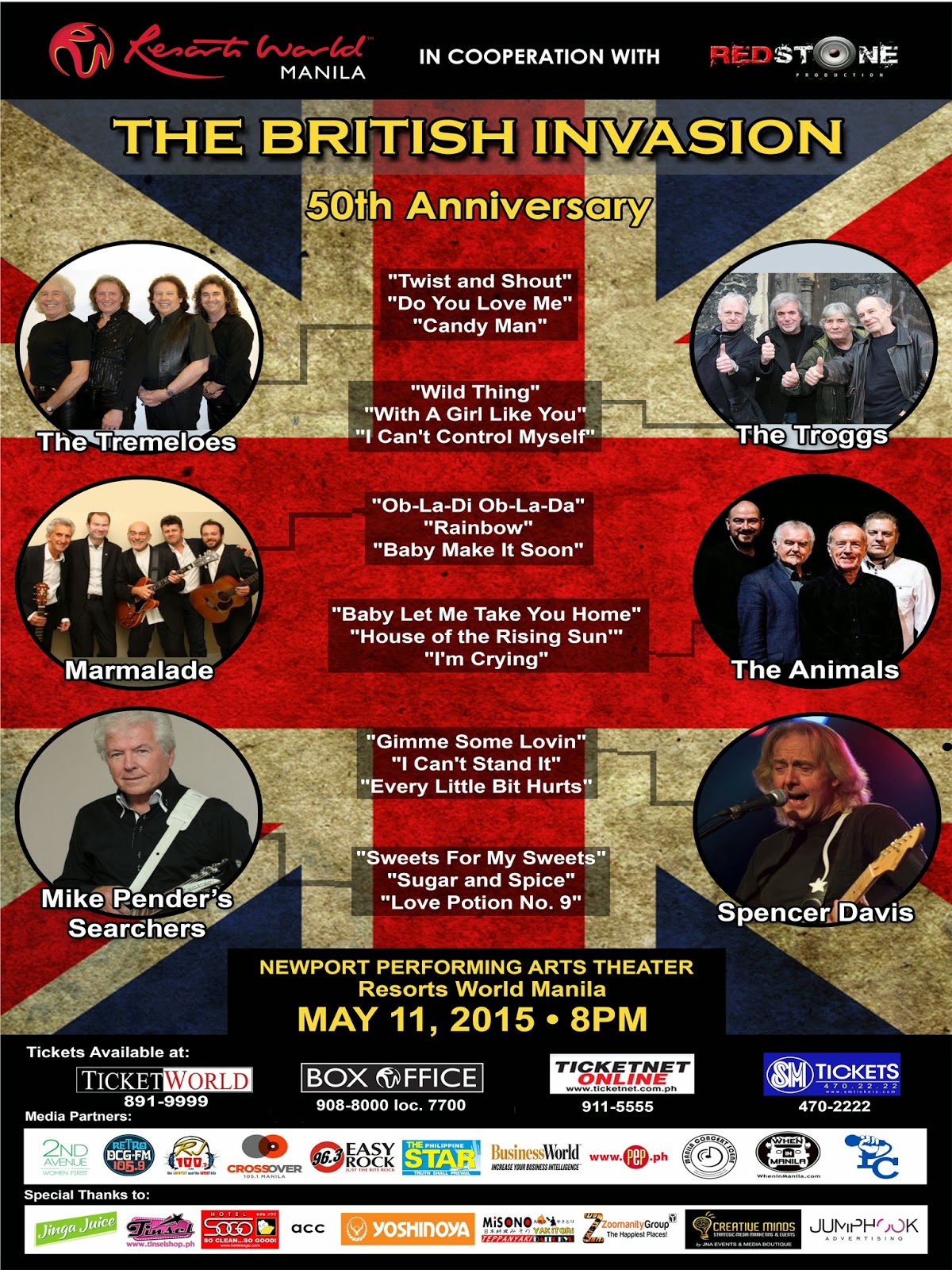 What do The Beatles, One Direction, Ed Sheeran and Sam Smith have in common? They are popular and British.

The British Phenomenon occurred in 1960's, when rock and pop music acts from the United Kingdom,as well as other aspects of British culture became popular in the United States. This was significant to the rising "counterculture" on both sides of the Atlantic. Pop and rock groups such as The Beatles, The Dave Clark Five, The Kinks, The Rolling Stones, Herman's Hermits and The Who were at the forefront of the invasion.

The British Invasion had a profound impact on popular music, internationalizing the production of rock and roll, establishing the British popular music industry as a viable centre of musical creativity, and opening the door for subsequent British performers to achieve international success. In America the Invasion arguably spelled the end of instrumental surf music, pre-Motown vocal girl groups, the folk revival (which adapted by evolving into folk rock), and (for a time) the teen idols that had dominated the American charts in the late 1950s and 1960s.

Now, as 2015 marks the 50th Anniversary of the British Invasion, six bands will be coming over to manila in a one night only performance. Almost two hours of superb and top charting hits that will be performed by The Tremeloes, The Troggs, Marmalade, The Animals, Mike Pender’s Searchers and Spencer Davis.

The Animals who began in Newcastle as the Kansas City Five were a major influence among R&B-based British bands in the early Sixties. The band moved to London upon finding fame in 1964. The Animals were known for their gritty, bluesy sound. The band balanced tough, rock-edged pop singles against rhythm and blues-oriented album material. Some of their greatest hits are “House of the Rising Sun”, “I’m Crying”, “We Gotta Get Out Of This Place” and “It’s My Life”.

The Marmalade was a Scottish pop rock group from the east end of Glasgow, originally formed in 1961 as the Gaylords, and then later billed as Dean Ford and the Gaylords. In 1966, they changed the group name to The Marmalade. The most successful period for the band, in terms of UK chart success was between 1968 and 1972. Hits do include “Ob-La-Di Ob-La-Da”, “Loving Things” and “Reflection of My Life”.

Mike Pender’s Searchers was the voice of the Searchers, one of the most influential band to come out of Liverpool in the early 1960’s. Pender also played the trademark Jangly Rickenbacker twelve string riffs on such quintessential hits as “Needles and Pins” which gave way to the West Coast folk-rock revolution closely identified with the Byrds. Garnering UK#1 hit in the 1963, “Sweets for my Sweets”, “Sugar and Spice”, “Love Potion No.9” and “Don’t Throw Your Love Away” are some of the recognizable and adored songs of this group.

Spencer Davis produced some of the most dynamic R&B singles of the sixties, hailing from Wales, Spencer founded the famed Spencer Davis Group in 1963, producing a dozen top 10 hit songs, helping to bring British rock n’ roll to the rest of the world. Hits include “Gimme Some Lovin”, “Keep on Running” and “Somebody Help Me”.

The Tremeloes was a band chosen by Decca Records over the Beatles when they both audition for the recording company on New Year’s Day, 1962. Decca Records chose the Tremeloes over the newcomers because, as a London based outfit, they would be more easily accessible. The Tremeloes did produce some hits for Decca Records, ultimately placing thirteen songs in the British top forty. Some of the hits of the band were “Twist and Shout”, “Do You Love Me”, “Here Comes My Baby” and “Silence is Golden”.

Last band on the tour list is The Troggshave continued to embrace both hard rock and alternative music during their more than 45 years together. The Troggs is an abbreviation of their original name the Troglodytes meaning cavemen.