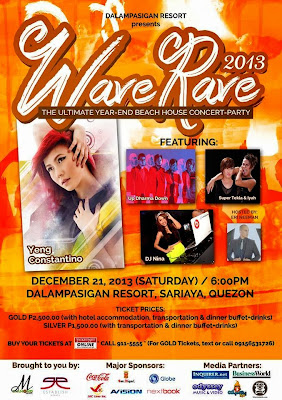 WHEN CONCERTS in big domes and parties in crowded urban hubs are all the rage, here comes an extraordinary concert-party experience this December.

What better way to end the year than be with friends and family in an out-of-town vacation, while enjoying finest music and entertainment?

Crack up with the infectious humor of stand-up comedians Super Tekla and Iyah from popular comedy bar “Laffline,” which is one of the trailblazers in Philippine stand-up comedy.

And to cap the night, dance to the beat of DJ Nina, dubbed as the metro’s hottest female DJ and who’s a mainstay stunner at the top clubs and bars in Metro Manila.

The 30-hectare resort is one of the budding tourist destinations in Southern Luzon waiting to be rediscovered. It’s just a two-hour drive away from Manila.

There will be a shuttle service for participants to and from the resort. Gold ticket holders also get free resort accommodation.

Part of the proceeds of the event will go to the victims of Super Typhoon Yolanda in Visayas.