Grace Poe ushers a Covenent for the Future

on November 22, 2012
FPJ's dream to rebuild the Philippine society through a social covenant lives on as daughter, Grace Poe, runs for senator this coming May 2013 elections. 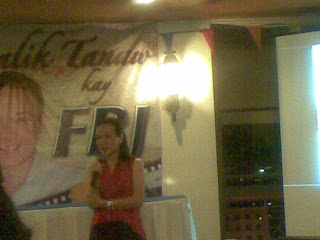 Like her father, Grace Poe believes the it is possible to push the country forward. Poverty can be eliminated by leading the nation towards unity and sustainable development.

With good governance and support of the people, she believes that Philippines will be a progressive country where Filipinos can live the good life.

Grace is grateful that actress Lovi Poe is 100 percent behind her plans to run for senator next year.


Llamanzares officially running as independent but is a guest candidate of both LP and UNA.  In her stint as  MTRCB chairperson, Grace Poe-Llamanzares had proven her leadership skills. She may be a newcomer to politics but not to public service. Reforms in the classification system for movies and television were sucessfully made under her leadership as MTRCB chairman. She brought together media organizations and government agencies to institute policies directed at protecting the interests of children. She brought forth opportunities and support to independent film makers.
2013 elections politics senator senatorial race