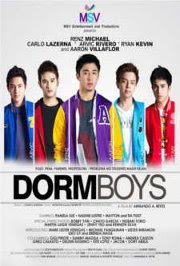 Dorm Boys tackles lives of five individuals in a college life drama. The movie offers so little as it doesn't go deep enough each interesting element. It is lacking in drama despite the fact that college life of students are considered fertile ground for stories.

TONTON (Arron Villaflor)– A good-looking 19-year old boy in pursuit of his biological father’s (Bobby Yan) affection and seeks to be recognized by his father, who has another family. He is living all alone since his mother is already in the USA with her common-law American husband.

Though his father attends to Tonton’s schooling needs, he does so with a heavy heart.

RICHARD (Michael Renz)– A well-off spoiled brat,  who would rather be with  his dormmates. He often treats them generously to drinking sprees and pigging out. He is romantically involved with his liberated young professor (Pamela Sue).

HECTOR (Carlo Lazerna)– A small-town boy who is pressured by his poor parents to finish a course which is not to his liking and mental capacity. His gay professor (Greg Calasito) offers a passing grade in exchange for sex.  The boy agrees to his professor's indecent proposal but backs out on the last minute. To his credit, he learns to follow his heart in handling such tests.

RUBEN (Ryan Kevin) – A street-wise, financially and academically-challenged loser who survives through guts, naivete and purity of his heart. An odd damsel (Nadine Lustre) comes to his life and somehow serves as an inspiration for him to give up some of his felonious habits and make the best out his limited personal resources.

IGGIE (Arvic Rivero) – The group’s mascot talks about getting a better life in the US, but he struggles with both his studies and his relationships.  He  loses his love (Mayton) to a best friend, Tonton.

The five main character find strength in each other’s friendship throughout their trial. The film is based from Cesar E. Buendia’s “Morayta Corner CM Recto (University Belt/Dormitoryo2)”.

The film's sound problems on top of its post production issues and low-budget status makes Dorm Boys a substandard movie.  It seems that the actors and talents were only using the built-in microphones on camera. There were several scenes in which theater audience had to struggle making out the dialogues. Many filmmakers were able to do a lot more in their films with even less budget allocation.
dorm boys film Movie review