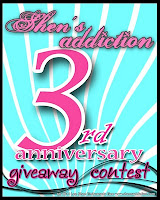 Shen's blog is celebrating her 3rd blogversary with a grand giveaway contest!